How to spot a house martin nest 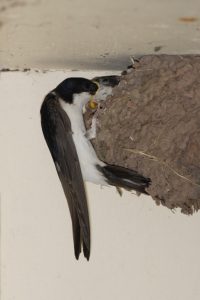 House martins have almost entirely forsaken their ‘wild’ nesting sites on cliffs for the artificial cliffs created by us humans – our homes. It is thought that house martins had already switched to nesting in human habitations as far back as Shakespeare’s day.

They build a mud cup attached to the outside of a building, usually quite high up and always under a shelter from the elements as provided by the building, such as the eaves of a house or jutting stonework on a church. They can be found on large, old buildings, such as castles and churches, but are just as commonly seen in a row of suburban semis or terraces. 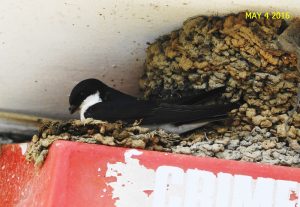 House martins are colonial and, more often than not, there will be several nests on one building or in close proximity on neighbouring buildings – there could be anything up to 60 nests in one colony, though numbers from six to twelve nests are more usual.

House martins arrive in Britain from their African wintering grounds in April and will set about repairing their nests from last year, or building a new one. They can have up to three broods, so their nests will be in use all the way to September or October. The best way to find a house martin nest is to look out for the adult birds swooping up to the tops of buildings and out again in a constant churring frenzy of coming and going.